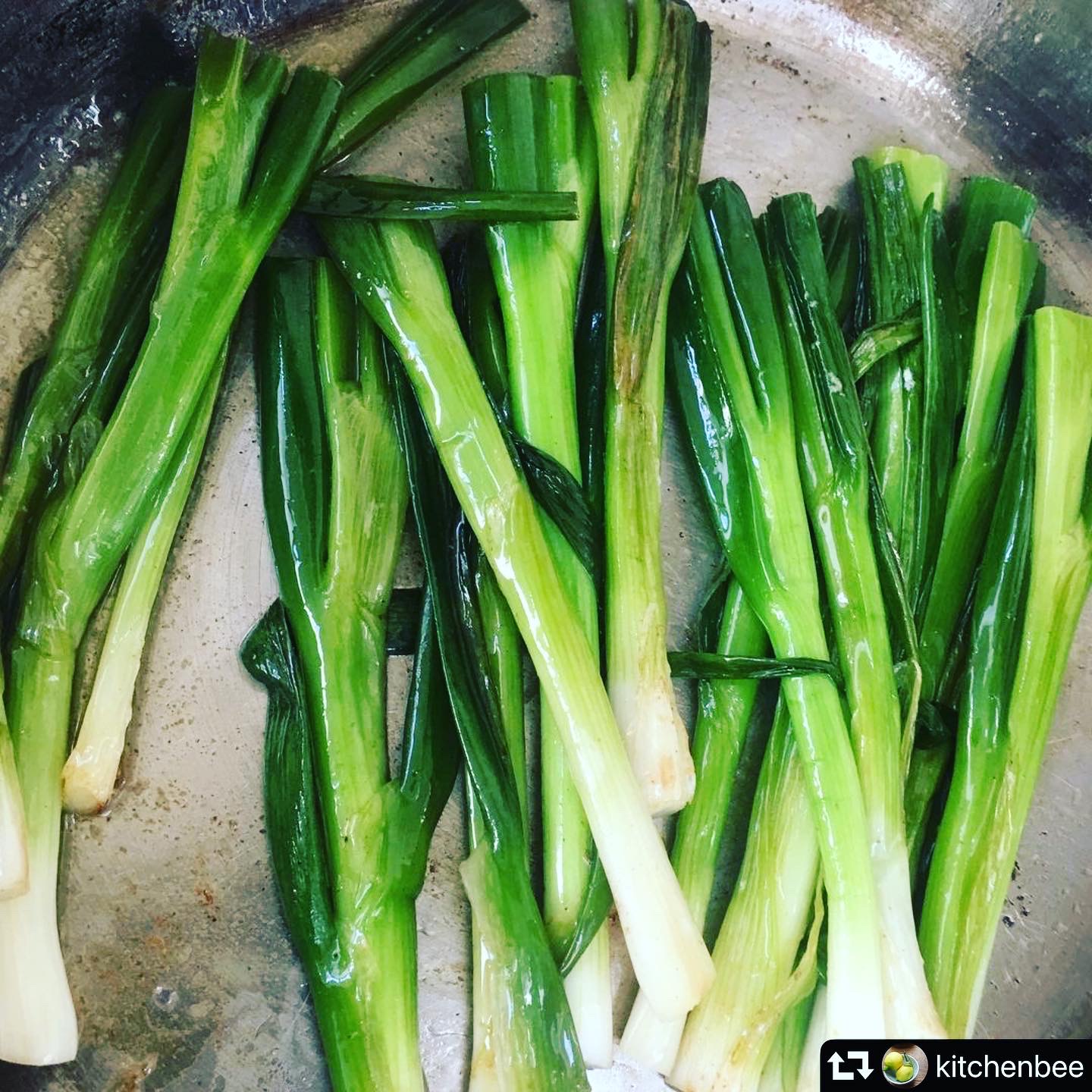 How do you use spring onions in your cooking? Earlier at the start of spring, food writer Bee Wilson asked me exactly this question.

Known as ‘ts’ung’ in Cantonese (or ‘cong’ in Mandarin) the character for spring onions is「蔥」which means hollow (通心). Spring onions have always been a staple in Cantonese style steamed fish, but also other regional dishes such as cong you bing (spring onion pancakes). We’d use the green parts for flavour, and white parts rather interchangeably with onions. And it was only recently that I realised this is not common in ‘western’ cooking when the green parts are usually discarded, as MiMi Aye wrote here:

Bee was also interested in the medicinal value of spring onions in traditional medical texts which were fascinating to explore. I wrote back to her about the culinary role of spring onions and meaning in everyday use:

Spring onions are used widely in Chinese cooking bringing key aromatics to food when cooked in oil, and used to balance (or cut) the fishiness in seafood dishes. They are often added for flavour but not always ingested. Some people consider them unclean when raw, and this may be why. Coincidentally spring onions and garlic are also members of the ‘five pungent roots’ which strict Buddhists refrain from eating – but I’m not entirely sure to what extent this has influenced Chinese culinary history.

My earliest memory of spring onions was eating Cantonese-style steamed fish, a dish that we had every day growing up in Hong Kong. It would always be cooked with sliced ginger and spring onions, finished with soy sauce and hot oil to open up the aromas. My mum would fillet it for me, not only making sure there were no bones, but none of the spring onions would end up in my bowl. At noodle and congee shops, cut spring onions – even considered the essential garnish – are often served in a soup spoon, so patrons could decide whether or not and how much to add, to their wonton or beef noodles, or rice congee.

It was not until much later as a young adult starting to cook for myself regularly did I start to appreciate not only cooking with – but also eating – spring onions. I use their white bulbs interchangeably with garlic and regular onions, usually with ginger considered as the perfect pair, keeping the green parts for both flavour and garnish (like chives), adding to batter for savoury bakes or pancakes, meat and fish patties, as well as dumpling fillings.

The use of spring onions have been documented in very early Chinese medical texts as an everyday treatment for fevers and a range of respiratory, circulatory and digestive issues, either using just its white roots or whole, cooked or as a topical remedy with other ingredients. Segments of the spring onion have different properties, the root being ‘spicy’ and ‘moderate’, and the green parts ‘warm’ – these should not be taken in the literal sense for taste and temperature, but are relative to the other elements in the concoction. Whilst many of the uses appear to be archaic, the advice to drink the water boiled with spring onions, the same for garlic and ginger, still exist on some health and lifestyle publications in the Chinese language. But headlines nowadays also try to explain the benefits of eating spring onions from a nutrition science point of view, how certain micronutrients they contain provide anti-inflammatory and cognitive functions too. I have recently come across postpartum dietary advice that recommends the use of spring onions in cooking as part of recovery to aid milk production – but this might go back to the idea of using it as an ingredient to prepare dishes which might improve appetite after having a baby overall?

Occasionally you might overhear children being asked to eat more spring onions at the dinner table too – not because of health reasons, but linking to the playful use of words in Chinese language and culture. Many objects share similar sounds (maybe similar to ‘homonyms’?) so this is why specific foods are eaten for their symbolic meaning. In the case of the spring onions – ‘c(tz)ong’ as they are called – they sound the same as the character for ‘intelligence’, also because they share the same root linguistically. The root character for spring onions also depict its shape which is hollow. What came to mind also was a cartoon spring couplet from the recently celebrated Chinese New Year that depicts a spring onion in place of this character. On Mainland China, some families retain the tradition of sending their children with a bunch of spring onions on the first day of school, as a gesture of good wishes for academic excellence.