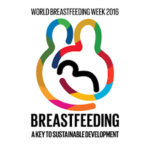 Today the 1st of August we celebrate World Breastfeeding Week (WBW), an initiative which started in 1992 to celebrate the formation of the World Alliance for Breastfeeding Action. In the years following, the annual event celebrates a theme each year to shed light on and promote breastfeeding practices around the world. Last year, WBW 2015 focussed on working women and breastfeeding, and how the environment can support nursing women who have returned to work, be it infrastructure providing nursing rooms to express milk, or flexible working policies – it all helps.

This year, WBW 2016 celebrates breastfeeding as a key to sustainable development in response to UN’s new sustainable development goals (SDGs) Breastmilk provides all the nutrients babies require of in the first six months and has nurtured the human race across millennia. It is natural, cheap, ‘green’ and offers the best protection for mothers and infants against infections in early and disease risks for future life. It also debunks fears on the safety and quality of infant formula in some parts of the world. Yet globally less than half of infants under six months are being breastfed exclusively. Why is this so?

In many traditional communities, women convalesce after childbirth in many forms of confinement including the Chinese way of Zuo Yuezi as a transitional period into motherhood, but importantly having this time to rest, be nurtured and nurse her baby. However, we see that in the last century, changes to our society with the rise of infant formula milks coupled with the competing demands of women in the household and workforce meant it has become more challenging to breastfeed exclusively. In Asia, despite the surge of awareness on the benefits of breastfeeding, the extent of marketing activities remain largely un-regulated with endorsements from celebrities and great splays of adverts across many public spaces. In 1981, the WHO had set out a code on the marketing of breast-milk substitutes, but more than three decades on, many countries have yet to fully endorse it.

In the Far East, it is not surprising to see infant milk products and equipment on display at doctors’ clinics, or hear advice from health professionals at your first scan on which infant milk is best for your baby. With adverts implying that infant formula offers a solution to a child’s condition such as this one by Nestlé, there is also a level of ‘medicalisation’ of our infant feeding practices which many new parents seem convinced about. They also want to know the level of DHA or vitamins which have been added. What they have easily forgotten is that infant milk products are designed to ‘mimic’ the profile of breastmilk and can only be the best gues-timate as mother’s milk adapts to her infants’ needs. It is also contains flavours of the mother’s diet which makes it all the more interesting. Mum’s milk is free, does not generate waste and improves a baby’s chance of survival and good health in the long run. Nursing helps mum to lose the extra baby weight and reduces risks of certain cancers too.

Whilst these  mothers opt for infant formula feeds as the default choice, on the other hand though, we also see mothers who try hard to breastfeed, but are unable to sustain this throughout the first six months – they are often being told they need to switch, or top-up with, infant formula. Western medical advice suggests that no particular diet is advised for breastfeeding but Eastern health philosophies promote special foods to support breastfeeding. Little has been done to explore the effects of various diets on nursing children, but one thing we know for sure: make time and provide support in the early days to help establish and sustain successful breastfeeding. This involves everyone – partner, extended family, healthcare professionals, peers… offering that little bit more of encouragement and consideration will make a huge difference.

As with other forms of faddy eating, our generation seemed to have found ways to make all forms of eating so problematic, including infant feeding. World Breastfeeding Week helps us to pause for a while and consider the financial, environmental and public health costs of our current suboptimal breastfeeding rates. It is with this recognition that we see breastfeeding as an investment to our planet and a key underpinning to the Sustainable Development Goals.