I would like to dedicate my first blog back after so long to one of my favourite childhood snacks – iced-gemed biscuits (花占餅), Hong Kong style. An item almost forgotten, thanks to my mum who included these in her recent selection of posted snacks to Audrey, these mini colourful iced biscuits bring back plenty of childhood memories and give it an instant sugar rush as the delicate iced toppings beg everyone to nibble them off before enjoying the bottom biscuits.

Iced-gem biscuits were originally created by Huntley and Palmers in Reading, UK (first the biscuit part as a consequence of a failed attempt to create a normal biscuit due to its shrunken size in 1850, then the icing in 1910), and now owned by the Mcvitie’s (a brand of United Biscuits). It was likely to have been imported to Hong Kong during the colonial period and has been adopted widely by locals, and those in the Far East (e.g. Malaysia and Singapore).

Most nutritionists’ first reaction to any prepackaged food is probably to peruse their ingredient list and nutrition information. Iced-gems weigh around 2g each (so they are rather quite airy!) and provides around 4kcal each, consisting approximately 25% sugars (sugar and maltose being two of the top five ingredients) and <10% fat. What completely surprised me was that these biscuits actually contain rice wine, which is unlikely to contain any alcoholic content, but helps to provide a distinctive flavour. A walk down memory lane and a treat to treasure, these sweet biscuits are to be enjoyed as an occasional treat. 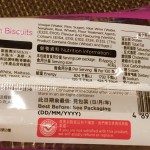