Yesterday, the health and nutrition world welcomed the long-awaited report on vitamin D published by the Scientific Advisory Committee on Nutrition (SACN). It introduced new values of Recommended Nutrient Intake (RNI) for vitamin D in the UK to ensure everyone has sufficient vitamin D all year long to protect musculoskeletal health.

SACN advises Public Health England and the UK government on health and nutrition matters. It comprises various expert panels to review the evidence on nutrient-based guidelines to protect the health of the UK population.

What is vitamin D?

Also called the sunshine vitamin, vitamin D is important for the strengthening of muscles and improving bone health.

Where can we find vitamin D? 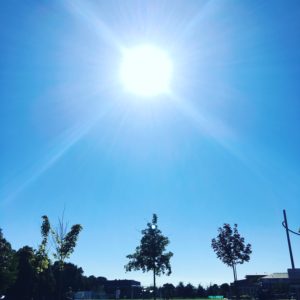 Vitamin D can be synthesised by the skin through the action of UVB rays in sunlight. The changes to the angle of the sun throughout the year means that places at latitude higher than 37̊ such as the UK do not have sufficient sunlight for vitamin D synthesis in the skin from late March/early April to September in the UK.

Where else can we get vitamin D from?

National nutrition surveys have shown that the main dietary sources of vitamin D in the UK come from animal sources, such as egg yolk, oily fish and meat and its offal such as liver and kidney. Vitamin D is sometimes added to items such as breakfast cereals either as vitamin D3  from sheep wool (hence not suitable for vegans) or vitamin D2 from fungi. Vitamin D can also be obtained from supplements.

Who should be concerned?

Everyone, as there are data showing that levels of vitamin D are poor in the UK, particularly for those who don’t spend much time outdoors. Also for those who have darker skin who don’t make vitamin D as efficiently in places such as the UK, or cover their skin when they are outdoors. This has an implication for some older people and those of minority ethnic groups in the UK.

How much vitamin D should we have each day?

Previously, no RNI was set for vitamin D for people aged 4-65 years. SACN has now updated that the RNI for everyone aged 4 years or above is 10µg per day, including pregnant and breastfeeding women. This value is unlikely to be met in the UK during October to late March, so daily supplementation is advised.

How about babies and young children?

Little ones are recommended to be supplemented from birth: 8.5µg per day for 0-1 years babies (not if they receive more than 500ml infant formula each day), then 10µg per day for toddlers till the age of 4. A nice summary from the BNF can be found here.

How should this be communicated?

Vitamin D has received lots of media attention in recent years. As people have become more aware of skin damage by the sun, application of SPF products including sunscreen are now a daily routine which can block vitamin D production causing longterm effects on musculoskeletal health. Vitamin D is produced in the skin, and is dependent on the intensity of skin pigmentation and the level of exposure. Some people in the UK who have darker skin and those who wear concealing clothing have found to be more likely to be vitamin D deficient, together with older people, who have been grouped as ‘vulnerable groups’. This is a term which should be taken with caution and sensitivity, especially in health promotion. The SACN report has noted that people with darker skin has the same capacity to produce sufficient vitamin D but this is compromised due to where the UK is located. This will apply to other countries of a similar latitude: