Since being pregnant, I have always been presented with questions and advice particularly relating to my diet. Unsurprisingly, pregnancy is an exceptional time when the diet of a woman directly affects the wellbeing of both herself and the growing baby. There are plenty of old wives’ tales based on Chinese traditional properties of food, being cold/warm/soothing/toxic etc, e.g. ‘mango and pineapple are bad for you!’, ‘shellfish cause baby rashes!’ and I often attract lots of wide-eyed reactions when I defy these claims in action, e.g. gobbling down a big tub of ice-cream (it apparently can ’cause’ miscarriage) under the scorching sun.

As a nutritionist, I am fully aware of the foods to avoid during pregnancy, and this is of course based on scientific evidence and more so related to food safety than customary beliefs. These include foods high in vitamin A, e.g. liver, pâté; mould-ripened soft cheese and blue-veined cheese, e.g. brie, camembert, Danish blue, gorgonzola; raw shellfish; raw or undercooked eggs and meat; deepsea fish, e.g. shark, marlin, swordfish, and no more than 2 portions of oily fish/4 medium-sized cans of tuna. The dietary advice for pregnant women are generally similar to the rest of the population, eat lots of fruit/veg (at least 5 A DAY), base meals on starchy foods (wholegrain varieties if possible), some milk and dairy foods, a bit more of the protein-rich foods (including 2 portions of fish a week with 1 oily) and limit foods high in fat/sugar. The only recommended supplements, surprise surprise, are folic acid (to prevent neural tube defects) and vitamin D (for strong bones).

Another common misconception is eating for two. It is a myth which is often used as an excuse to spoil oneself during pregnancy, and sadly the actual increase in energy requirements for pregnant women is only a relatively small fraction of the energy intake of non-pregnant women and only applies to the last 3 months, when energy requirements are only minimally increased by 200kcal per day. The fact is much of this will be balanced by the fact that women are usually less active at this time. Eating too much can end up in excessive weight gain during pregnancy and make it difficult to shed it after birth. This may also lead to big babies, which may increase their risk of being overweight/obese in later life. Typically, the average woman will put on 10-14kg throughout pregnancy, but this will depend on her pre-pregnancy weight. If a woman is overweight before conceiving, the extra energy needed during pregnancy may be met by using existing fat stores so there should be less weight gain during pregnancy. If a woman is underweight before conceiving, she may need to increase her weight to achieve the necessary fat stores to maintain the pregnancy and support breastfeeding.

To top up energy levels, it’s important to snack healthily – choosing foods low in energy density, such as fruit and veg sticks, slice of toast with thin layer of spread, pot of low-fat yogurt or even a small bowl of soup – to make you feel fuller for longer. 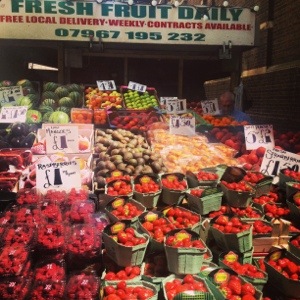 My 5-A-DAY provision on Kingsway