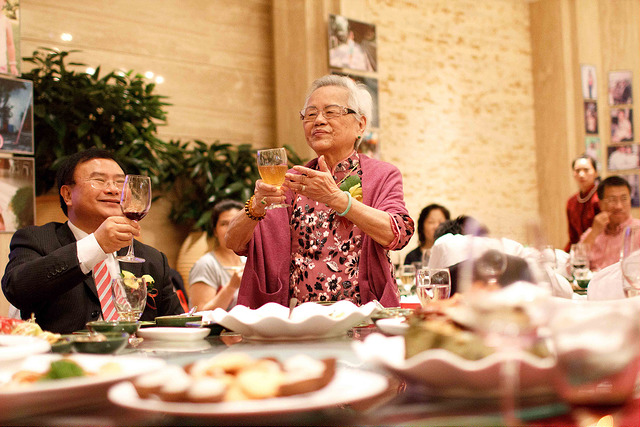 A few weeks ago, I wrote about how food scents shaped my memories of childhood, of which my grandmother had played an important part. She had since been taken ill and passed away this morning quietly and peacefully as her body stopped functioning in the early hours of Hong Kong. Thanks to Whatsapp and the frequent updates by my relatives, I was able to follow closely how she had been in her final days. My uncles, aunts and cousins, had been guarding round her hospital bed. Most importantly, her carer Sai Mui （細妹）has been instrumental in making sure my grandmother felt comfortable, feeding her, giving her massages and offering many words of reassurance. She has worked for the family for around 20 years, and had not only provided round-the-clock care, but companionship, for both my grandfather and my grandmother in their final years, from Macau to Hong Kong. To that end, we are forever indebted to Sai Mui, as I would dare to say, no one in the family would have ever been able to take care of our grandparents to the extent she had.

At 103 years, my grandmother certainly had lived a remarkable life. Born to a large wealthy family in Shiqi, Zhongshan （中山石岐）as the 17th daughter in 1916 (the math doesn’t quite add up, as the older Chinese would consider themselves already 1 year old when they were born), she would call the Father of Modern China Sun Yat-sen （孫中山）her neighbour (tong heung 同鄉) as he also came from the same district. As a secondary school graduate, my grandmother was considered well educated and had beautiful and robust handwriting. She met my grandfather (from neighbouring Xiqiao, Nanhai 南海西樵) who was a sea-man stationed in the area. The story goes my grandfather would pass by my grandmother’s house every day to check on her. They were eventually introduced through a relation and soon fell in love. This was considered very modern during a time when arranged marriages were prevalent.

A few years into their marriage, my grandparents had to evade from the Japanese Occupation with their young family in Canton. She would recall the sirens of fighter-jets, people scrambling for their lives and that they ate sweet potatoes as their main staple. She called herself lucky not to have ever encountered any Japanese soldiers. After the War, by proximity, they and a couple of others including her younger sister (number 19th, who then moved to Hawaii) were able to settle in Macau, which was a Portuguese colony at the time. There, they gave birth to my dad, who was their seventh child to add on to five older boys and one girl, and my aunt, who was their eighth and second daughter. A distant relative subsequently “recommended” my grandparents to move to rural Hong Kong, which was then a British territory. In the late 1950’s, they settled, and called it their new home in Sai Kung (西貢), and gave birth to their youngest daughter. Just a few months before, their eldest granddaughter was also born.

On our recent visit, my grandmother told me how generous she had found the British officials. Due to land reforms at the time, their first home in Sai Kung had to be taken by the government, and so were given a new plot in Pak Sha Wan (白沙灣). “Gum ho geh, di ying gwok lo （咁好嘅啲英國佬）” she would fondly recall in her Shiqi accent, how they were relocated to a comfortable new home with good fengshui, situated amongst the hills and a view of the bay. This was also where my family lived in when I was born.

All of her nine children went on and had families of their own. I have lost count of the number of cousins and grand-cousins I have. As I recalled on my childhood in an earlier post, many of us would spend countless Sunday afternoons and festivals together… Chinese New Year, Tuen Ng (Dragonboat), Mid-autumn… food and drink formed a fundamental part of our memories together.

Later on as I grew older, my grandparents had moved back to Macau. I would always find her large, warm smile greeting us at the door of their flat. My grandmother, in-charged of the kitchen till she was well into her 80’s, would make sure she cooked for me: home-made soups of various delicacies such as shark fin and dishes of many kinds: steamed fish (a must) and sometimes prawns or a crab to share, green veggies, meat patty, chicken and roast pork, and my dad’s favourite – fried potatoes with onions and spam (luncheon meat). It was at these familiar meal times which reinforced my Chinese table etiquette – no one would start eating unless everyone around the table has been greeted with “sik fan (食飯)” which means “eat rice”.

We would take the time to catch up over food. My grandmother would be the last one to finish as she ate slowly, sometimes well over an hour, enjoying the tiniest flesh off the fish bones, with her drink of’ “Zhongshan Maciera brandy”. Her philosophy of drinking was sensibility: “Ng ho yum kwong jau（唔好飲狂酒）”. She had a small shot of it at every meal, including breakfast. My grandmother would also make sure her guests had enough to eat and drink and spent a good part of the meal putting food in their bowls (and topping up their shot glasses). It almost certainly always ended up with some sort of ‘chopsticks fight’ as my dad or some uncle or auntie mischievously tried to stop her.

After each visit, before I took the ferry back to Hong Kong, she would give me many food “souvenirs” for my mum, and back to London: all kinds of Macanese pastries and dried shrimps, which she suggested, make up an easy dish with only hot oil and soy sauce, good just accompanied with rice if I’m short for time. These would also be supplemented with red packets and many good luck wishes at the lift, where she kept on going until the doors shut.

It is in all her generosity that I remember my grandmother. However, as I try to locate these thoughts with fondness, they are intertwined with my own sad memories of my parents’ broken marriage and the many turbulent turns to my family’s fortunes when I was a child. I would find refuge in my infrequent visits to my grandparents in Macau, the stability which was largely absent as a growing teenager that I truly yearned for. I was living with my mother, and would only see my dad once every 1-2 weeks. Eventually when I was older, I was able to spend slightly longer trips with my grandparents, which also involved visits to the casino. My grandfather would be at the slot machines whilst my grandmother taught me how to play ‘Baccarat’. Regardless of the morality of gambling, it was an exciting and social past-time for my grandparents who were already in their 90’s.

After my grandfather passed away in 2009, my grandmother no longer dyed her hair black. It was a way for her to mourn a companion she lost after 74 years of marriage. However disheartening it was to outlive many of the ones who had come after her, including her own children, my grandmother always carried a positive disposition and a wise outlook in life. “Fan yun fan yun (凡人「煩」人), of course our (ordinary) lives will have their troubles!” Before her fall at the end of last year, she would still be smoking about half a pack of cigarette each day. Her doctors have once asked her to keep smoking and drinking, as she always had.

As a centenarian, my grandmother never lost touch with the younger generation. She was always interested in and cared for each of our lives, and related to our concerns. Much of this was expressed through food and nourishment. My mother still recalls, as a former daughter-in-law, how my grandmother would buy freshly laid eggs from the villagers every morning to cook for her when she was pregnant with me. When I myself was pregnant a few years ago, I remembered speaking to her over the phone. She asked me not to worry too much about what to eat, the ‘cooling’ (清涼） foods should do – based on the health belief in traditional Chinese medicine that carrying a baby puts your body in the hot state – and drink lots of water. My grandmother also breastfed all of her children. “It’s the best, for six months (人奶最好㗎，餵六個月)” she said to me when I brought Audrey back at three months. This was before any public health guidelines were conceptualised on infant feeding, she seemed to have all the right ‘evidence-based’ experience and simply nailed it.

When my grandmother knew I was studying to become a nutritionist, she often referred to me as a “hygienist (衛生家)”. It was a novel career which did not pre-exist in her time. As I reflect on a life well lived, how much of it was based on ‘modern’ science? Our era seemed to have lost so much of the common sense many of our forebears had, despite more information being readily available than ever before. If we could only slow down, be mindful and appreciate the wisdom of our own social histories, we too could find ‘health and wellbeing’ within ourselves and with each other.

7 thoughts on “A grandmother’s wisdom”