Food waste – have we considered all the ‘trimmings’?

As a young child, I was taught never to waste food. It was the mid-1980’s, when Ethiopia was at the height of its famine and images of starving children were broadcast to many parts of the world, including Hong Kong, prompting mass-scale humanitarian efforts. Whenever there was even the tiniest scrap left on the plate (or bowl), my mother would say, ‘Remember those African children who do not have food to eat!’ This guilt of leaving any food behind has stayed with me all along, and I always strive to either consume or take away any leftovers. It is partly cultural as this is a Chinese virtue to be had, but also the problem we face with the wastage of food is staring right at us. Around one-third of the food produced is still lost or wasted, as this FAO article suggests. In one of the first media interviews I did back in 2007, I offered my opinion on food waste in this article with the South China Morning Post as an early career researcher.

With the rise of eating out and convenience eating, there is another problem with waste. Not about the food alone, but all the ‘trimmings’ which come with a meal or takeaway – the packaging and disposable cutlery. Close friends know I feel passionately about re-using the plastic ones and are often sent away with leftovers following a meal at ours; but after all they are not meant for permanent use. Yesterday, despite dining in at my favourite Vietnamese deli at Hammersmith, I was given a takeaway bowl, with a small container to be served with some wooden chopsticks and a plastic spoon. Upon enquiring, it is apparently company policy that they do not offer ‘regular’ bowls at the deli. I felt sad seeing all that to be disposed of after serving its one-off purpose, and another one to add to our growing quantity of refuse. How do the cost-benefits weigh by not washing up? What are the long term consequences of relying on these disposables? 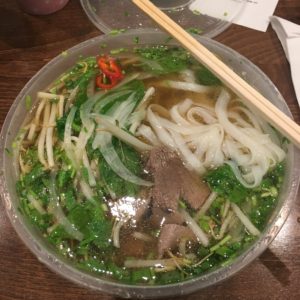 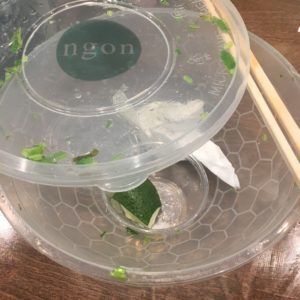 Recently, the BBC produced a documentary about the mountain of coffee cups which go into waste every day – as the urban myth goes, these cups are actually not recyclable – a conversation that companies are not prepared to engage in. Somehow, getting a hot drink in that paper cup represents a a way of life and is popular with working professionals. It has become the norm which goes with the hustle and bustle in the city. Certainly bringing your own mug is inconvenient, especially for people who don’t always bring a big enough bag or one that is suitable for hot drinks.

It is not glamorous to talk about food and packaging waste. But as our age of consumerism continues, this will become too big of a problem to ignore. The thought of living with rubbish is unbearable, but the time may come soon for us to embrace this issue, and we are all found guilty of it.