When we talk about food, who are we including and excluding? Scotland’s Foodscape – reflections from an outsider

Having recently returned to Edinburgh for Scotland’s Foodscape at Summerhall– the first gathering of its kind to place many food minds in Scotland (and beyond) together – reignited some of my initial sentiments on studying about diets as a foreigner. Back in September 2007, I was an international student enrolled to the MSc Public Health Nutrition Programme at Queen Margaret University (QMU), Edinburgh, fervently looking forward to pursuing an overseas Postgraduate degree in a field I have passionately worked and studied in since Secondary School. What I did not expect to encounter were conversations about diet which I was unfamiliar with. Growing up in Hong Kong and being blessed with the opportunities to travel abroad, I regarded myself to have a rather broad understanding of food cultures from around the world. I decided to study nutrition because I firmly believed that we are what we eat, and acquiring training abroad would equip me with the necessary qualifications on nutritional science, an area of research many Asian countries still fall behind.

As the saying goes, however, we eat food not nutrients, so talking about nutrients should undoubtedly involve understanding why these nutrient-containing foods are consumed. And when we preach ‘healthy eating’ to the masses, who is entitled to speak about food, a commodity so closely linked with many cultural dimensions, to make any form of nutrition education effective? It’s easy to stereotype dietary patterns, but as we are not part and parcel of a very globalised food system, how we eat is no longer defined by race and ethnicity (I shall come back to this issue with food and identity).

Titled Scotland’s foodscape, the two-day event interrogated what food means to Scotland, how food in Scotland is dynamically defined through exploring its changing landscape – particularly how Scotland fares the one of the worst overweight statistics in Europe. We had plenty of opportunities to discuss food-issues around production and consumption, but as an outsider to Scotland, how could I make a meaningful contribution to these conversations?

The programme was wonderfully chaired by David Szanto from UNISG and Charlotte Maberly from QMU with a panel comprised of Louise Gray, food journalist, Guy Grieve, founder of the Ethical Shellfish company, Shirley Spear, chair of the Scottish Food Commission and Geoff Tansey, Curator of the Food Systems Academy, who altogether debated on how issues with food are framed and the key players involved. Whilst the panel set off their various discussions, live demonstrations of ‘making food’ were also showcased, with Gerry the butcher from Campbells butchering a hoggit and Barry from Loch Arthur Creamery making raw milk cheese, which was absolutely beautiful and eye-opening – these processes are very often concealed in our food chain and rarely depicted.

Each day also hosted four sessions, which we all sampled a taster of them through a PechaKucha style. The topics were wide-ranging: from looking at haggis and deep-fried Mars bar to depict cultural representations of Scottishness to maintaining Kosher food in Scotland; the resurrection of the ancient grain of the Scottish beremeal to contemplating and addressing issues of the food supply to feed the future – who’s up for a soylent feast? Interweaved with lunchtime workshops to look at Bread Matters, crofting (a form of land tenure and small-scale food production) in the Highlands and the enactment of a cooking session of the now defunct children’s cooking bus. A food event is not truly one without experiencing the tangible! Preceded by gin-o’clock, we shared our evening meal with our self-churned butter, hoggit carved by Gerry the butcher in the morning, many beautiful vegetables and a rhubarb junket and a Scottish cheeseboard to end our first day telltaled by Barry. Prior to bidding farewell, I also tasted worms and crickets for the first time – the practice of insect eating is termed as etymophagy, a potential solution to mitigate climate change and supplement the world’s shortage of animal protein. 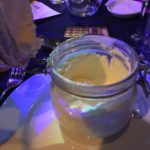 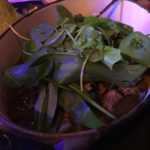 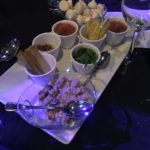 Scrumptious evening meal by the Edinburgh Larder and some insect-pecking 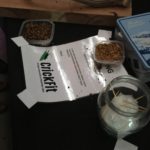 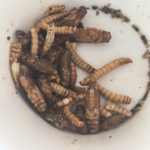 For an outsider like me, Scotland’s foodscape provided me with newly earned and fresh perspectives on food and culture in Scotland, with implications for the world, where boundaries between local and global are increasingly blurred. Understanding the dynamics of food production and consumption, may all help to create better solutions to fairer food systems for you and me.